I don’t know who said “you can never go home again,” but I’m here to tell you that person was wrong. I joined FINN Partners in July of 2018, but I like to say I’ve been here far longer. Why? Because after I graduated from Muhlenberg College in 2004, this was the first building I walked into to begin my career. I would leave four years later to embark on a journey that brought me from consulting for celebrity social media influencers to being featured in the The New York Times, but I never forgot this place. I always wanted to come back. And now, finally, I have returned.

When I began here I didn’t work in social media because it didn’t exist yet. I started in “interactive” marketing. I wrote content documents and wireframed websites. I loved it, but I wanted more. And then, in 2005, something game-changing happened. Willy Wonka (here played by Mark Zuckerberg) opened the gates to his Chocolate Factory (“THE Facebook” then, just “Facebook” now) to the public.

I was one of the first non-collegiate members of Facebook. I became immediately obsessed. Then came Twitter. I ran there, too. Ditto for LinkedIn, and Instagram… and Hipstamatic and 12Seconds.TV and Vine and Second Life and… you get the idea.

What can I say? I am addicted to social media. I’m not addicted to being ON it… okay, I’m addicted to that, too. But I’m also drawn to the very idea of it. How humans use it. What they say on it. Its benefits and its detriments. It is a magical place and a dangerous weapon. A community where millions interact every millisecond, and a place where you can feel so very alone at the exact same time. It is good and bad. And it’s here to stay.

Months ago, mobile usage eclipsed the amount of time people spend watching TV. Ad dollars funneled into digital have outpaced the amount earmarked for print and television. The average person spends over two hours on social media every day. And I get to work there. How cool is THAT?

Why do I work? Because I LOVE social media. I want to be the first to know about the latest functionality, whether it’s a new Instagram sticker, a beta version of a Facebook ad module, or an entirely new network. I want to test it, break it, assess it from every angle, and decide if it’s worth bringing to our clients.

I work because I am surrounded by geniuses who also love what they do. From my tight-knit social media group, to our paid media team, to the broader and far larger digital practice, there are over 100 skilled artisans of zeros and ones bringing their A-Game to FINN every day. They are a joy to work with, and to watch work. I go home every night having learned something new or questioning something I thought I knew. I am challenged, inspired, and empowered. Just like I am addicted to social media, I am likewise addicted to FINN.

Why do I work? Because I have the privilege to work in the greatest industry in the greatest practice area in the greatest agency in the world. I’ll bet any of my fellow FINN folks feel the same about why they work, too. I can say without doubt or question: this is THE place to be. I wouldn’t dare work anywhere else. 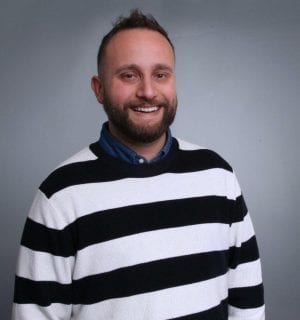